There aren’t many places in the CR where you can find sandstone boulders with the right kind of texture. At Bor the sandstone offers all kinds of holds ranging from holes to tiny ledges. And it’s not crowded. Perhaps that’s because this hill with 1,400 boulders is relatively remote. Read more about it, and if you go, treat the enchanting nature here with respect.

“At Bor you will find rounded formations, holes as big as footballs, little holes and ledges.”

Bouldering around Bor took off in the 1980s, yet the area long remained unknown, even to many local climbers. More hikers and cyclists knew about the hill than climbers. Bor lies on the border with Poland and only a small Czech area is open for climbing. Unfortunately, climbing is banned entirely on the Polish side in the Gory Stolowe national park, where an area comparable to Fontainebleau is completely off limits.

Each of the six sectors on the Czech side of Bor has its own distinct character. The local climbing features rounded formations, holes in the rock as big as a football, small holes and ledges. Everyone will find something to their liking on these finely grained sandstone rocks.

Here you will find technical slabs and power overhangs, and climbers from both the Czech Republic and nearby Poland. Beautifully shaped boulders strewn about the forest floor in the moss or wedged in the hillside (like well-known Austrian and Swiss areas) and the numerous walls offer over 1,400 routes to climb. There are plenty of routes for children and beginners (rarely will you see so many rocks beckoning with easy ascents) and experienced climbers and professionals will enjoy over 350 boulders at Bor with difficulty above 7A, including 140 above 7B+. The range of boulders at Bor is diverse. You can find easily overlooked low routes that require one beautiful move or a strength move, as well as tall boulders that simply take your breath away. 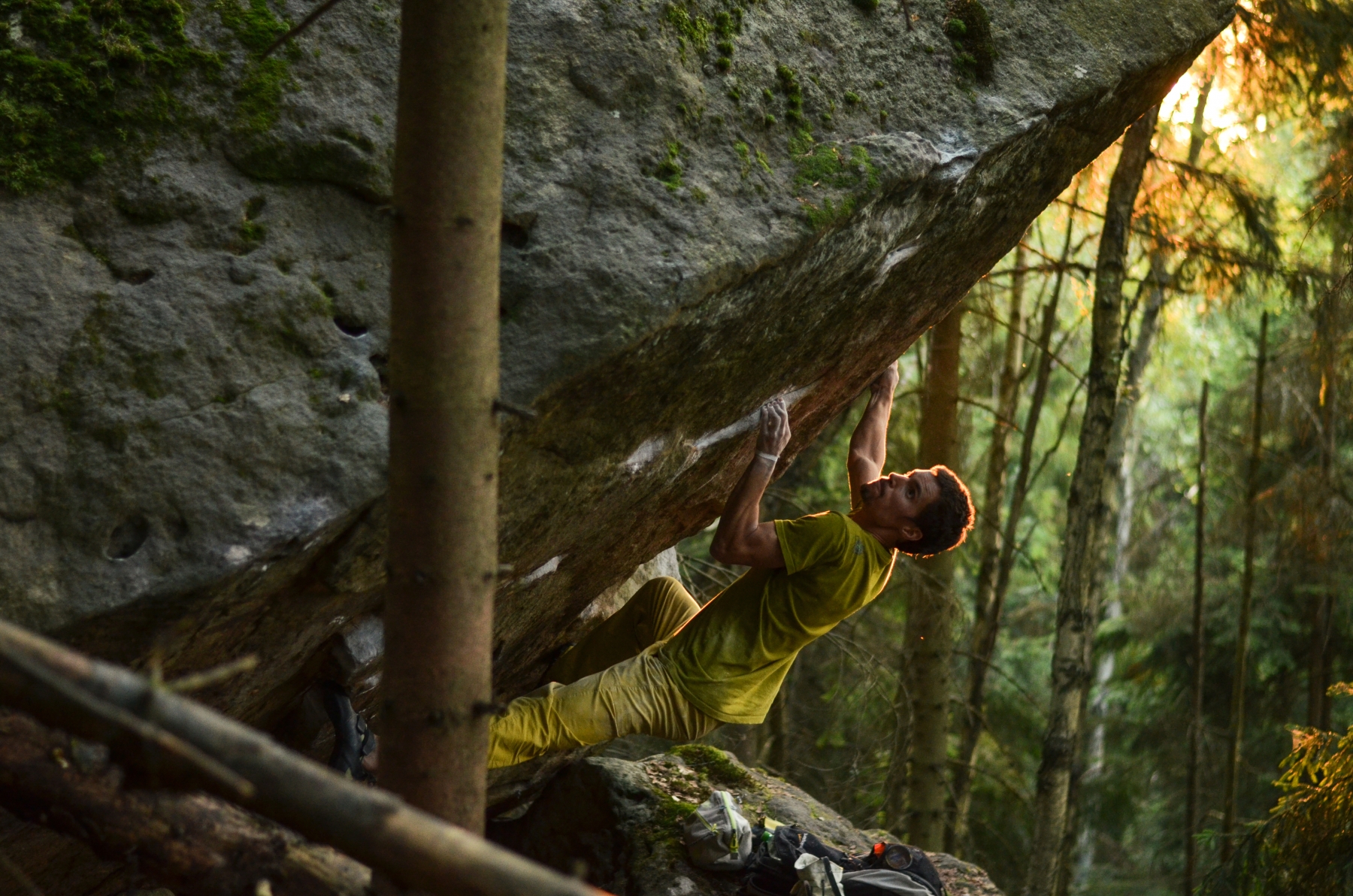 Origins of climbing at Bor

„Bor 2002: Everything was fantastic! Every idea for a move made sense and nothing was wasted.”

When I first came to Bor in 2002, there were only a few finished routes. There wasn’t a single rock that had been climbed entirely. Wherever I looked, new routes were begging to be climbed. It was fantastic! Every idea for a move made sense and nothing was wasted. My friend Petr Maixner introduced me to the area, and the two of us searched for and picked out the most obvious and most beautiful boulders. When we began to run out of ideas for one rock, we simply moved on to the next one. In this way we marked about 50 rocks and roughly 250 boulders.

Climbing in the area grew with the arrival of Andrej Chrastina and Jirous Přibil, and then took off with the Stránik brothers and the group around them. They found difficult climbs over 7C and the first 8A, along with several unconfirmed 8B routes (by this I don’t mean that the routes are overrated, but rather underrated – most boulders over 8A/+ never get repeated, even though the visits of such climbers is increasing). A trip to Bor can often end with a bit of frustration, but it’s always a tremendous climbing experience. 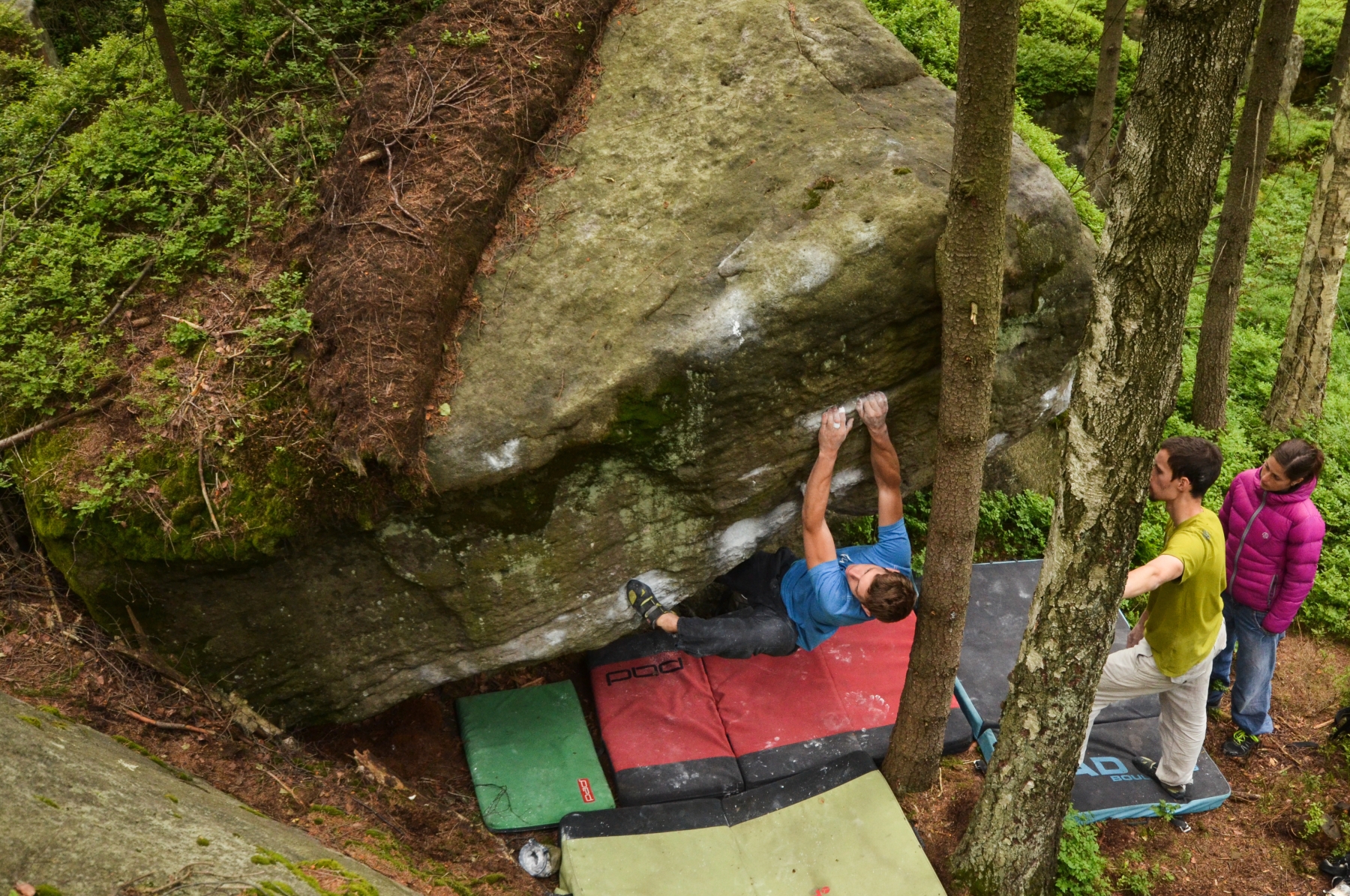 Best time to go to Bor

If you’re looking for ideal conditions, then you should consider an autumn trip to this area in the northeast of the Czech Republic. At this time of yearmost rocks lying on the north side of the hill are dry and the temperatures are good for climbers of all levels. With the exception of the omnipresent biting midges it is certainly the best time to head to Bor. Once winter arrives, the boulders are left to thick-skinned climbers impervious to the cold. But the weather does not always cooperate with these self-destructive mad souls. Sometimes most of the round boulders are covered with snow. Then there’s no other choice but to head for the surrounding walls. For families with children and the adventurous of heart, I recommend the summer! The tall spruce forest shades most of the area and pools of spring water cool the hot summer air – a romantic setting you will only find here.

Where to find the rocks

You can access the area from either the Czech or Polish side. The Czech trail in is a bit longer, the Polish one is much more controversial. As a national park, the Polish side is more protected, which means problems with parking. From the Czech side you will not only need to prepare for a day of climbing, but also the hike in. But in return, you don’t need to worry about any fines. The parking lot for hikers is in Machovská Lhota, where you can spend the night (if you are quiet after 10 pm) and use the outhouses. 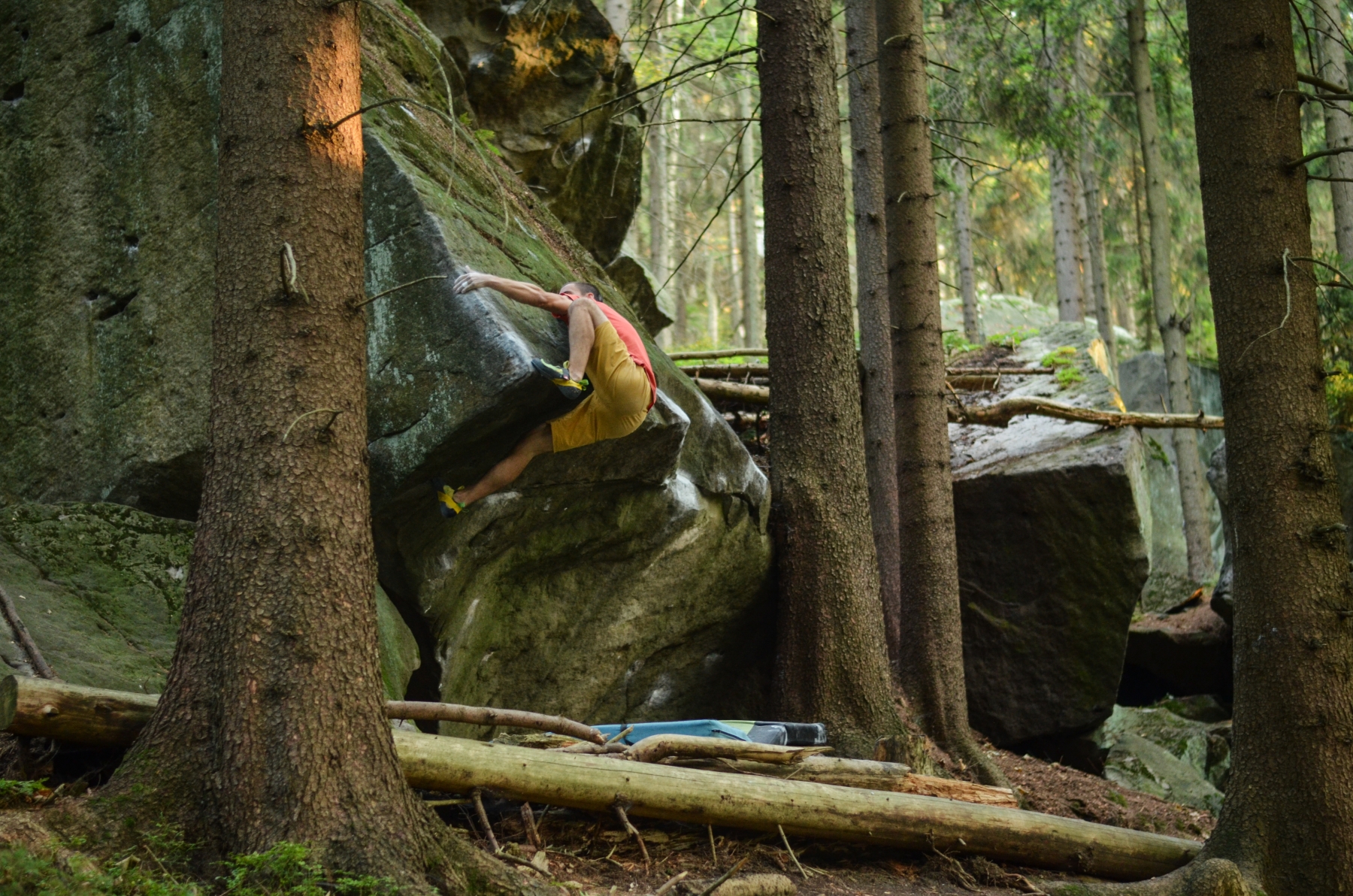 Best place for a climber

“Any climber who discovers this place is lost, because they’ll never find a better place to climb.”

On days off you can visit other nearby sandstone areas full of boulders like Ostaš, traditional-sport climbs with ropes at Teplické skály, get some pure adrenaline at Adršpach, or look for never-ending adventure at Broumovské stěny. Any climber who discovers this place is lost, because they’ll never find a better place to climb. Even if I climbed only the best routes, there’s enough climbing here for several lifetimes, not just mine. And I’ve still got quite some time before I start pushing up daisies.

The perfect climb is different for every climber. Here, I’m not going to recommend any particular boulders, but instead refer you to a new guide that will help you find the most beautiful boulders. It uses a clear set of pictograms to assess the beauty, character and objective safety of all boulders. With guide in hand, every visitor can easily find the climb that is perfect for them. There are tons of routes to choose from!

The guide also shows the area that is off limits because it is a source of drinking water. We therefore ask you to be respectful while in the woods and stay out of prohibited areas.

Note: In September 2018 Jan Šolc and Lukáš Rendl published the first complete guide to Bor. We believe it’s a great publication. You can add it to your library of climbing literature by ordering here: holdsmarket.com 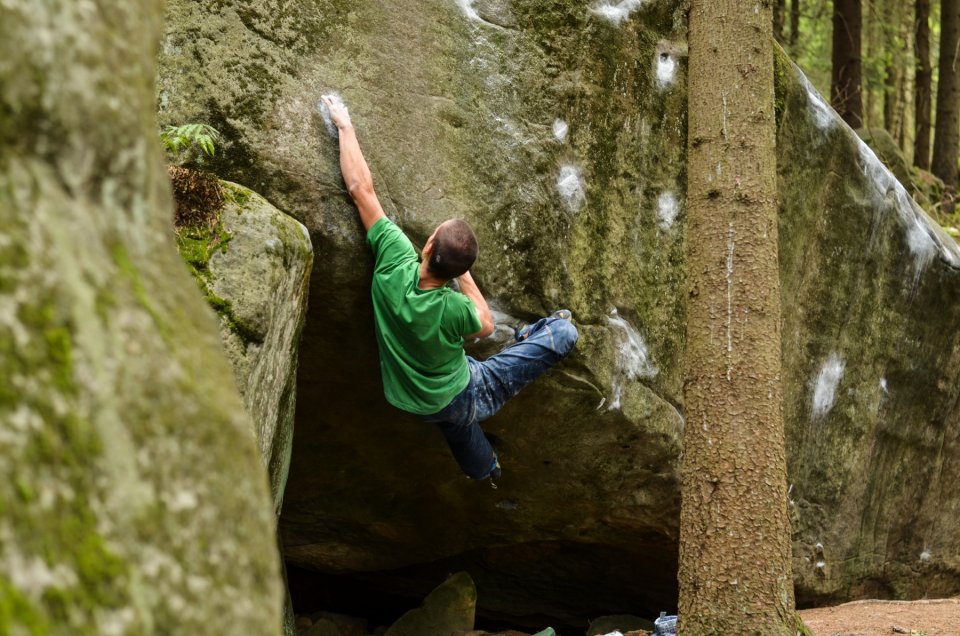 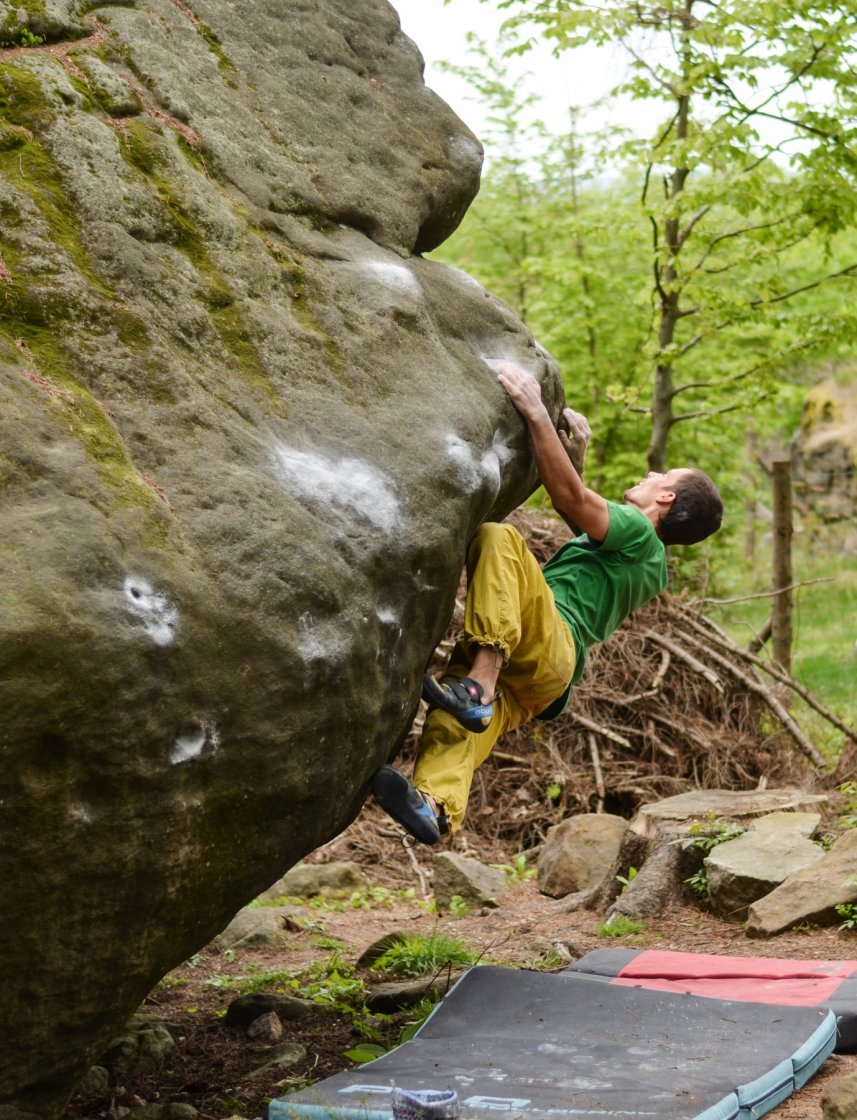 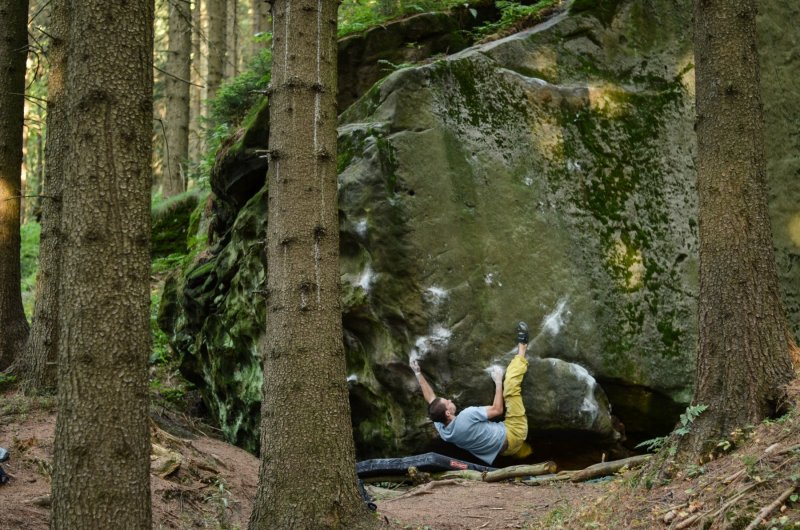 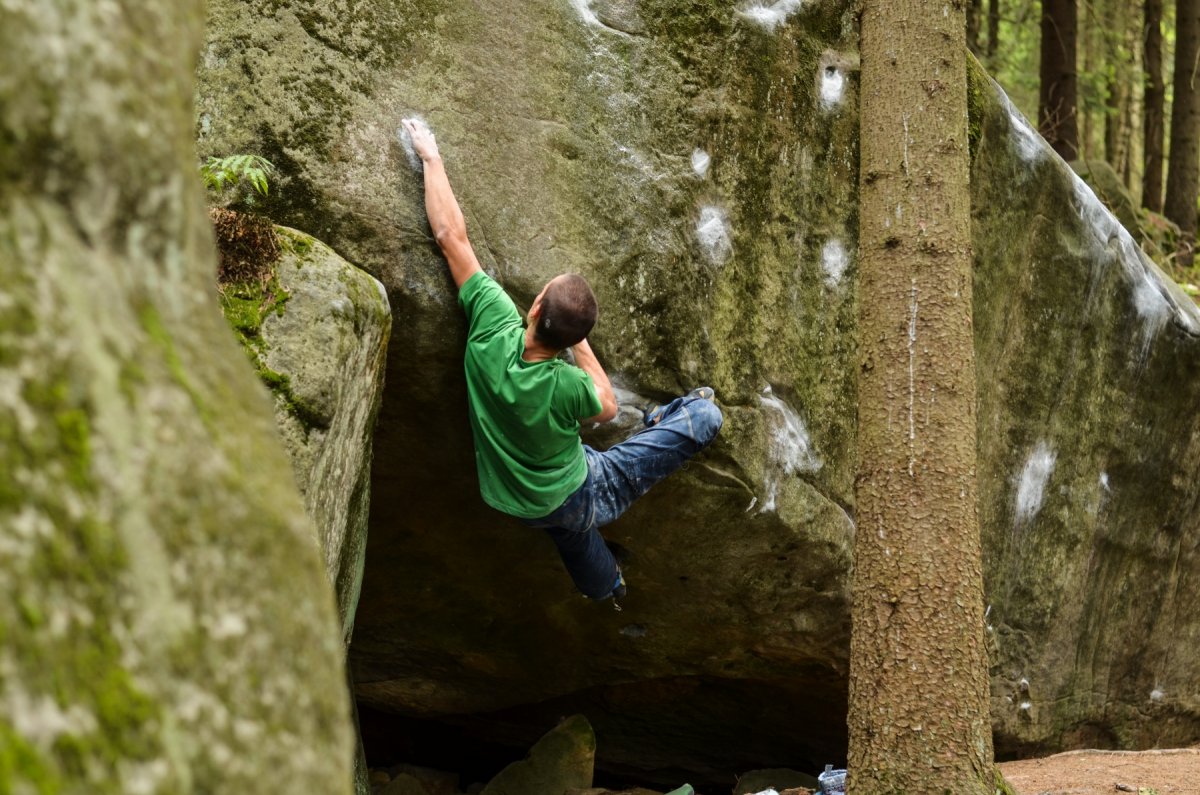 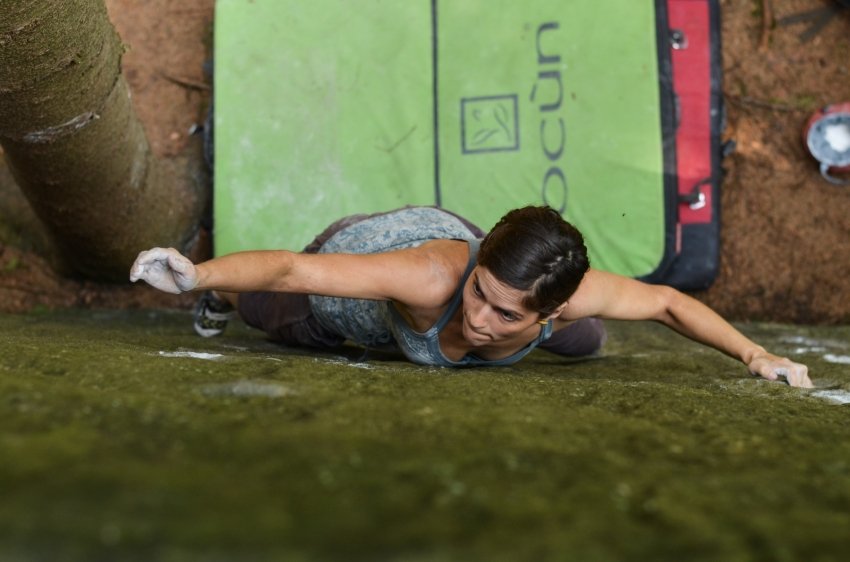 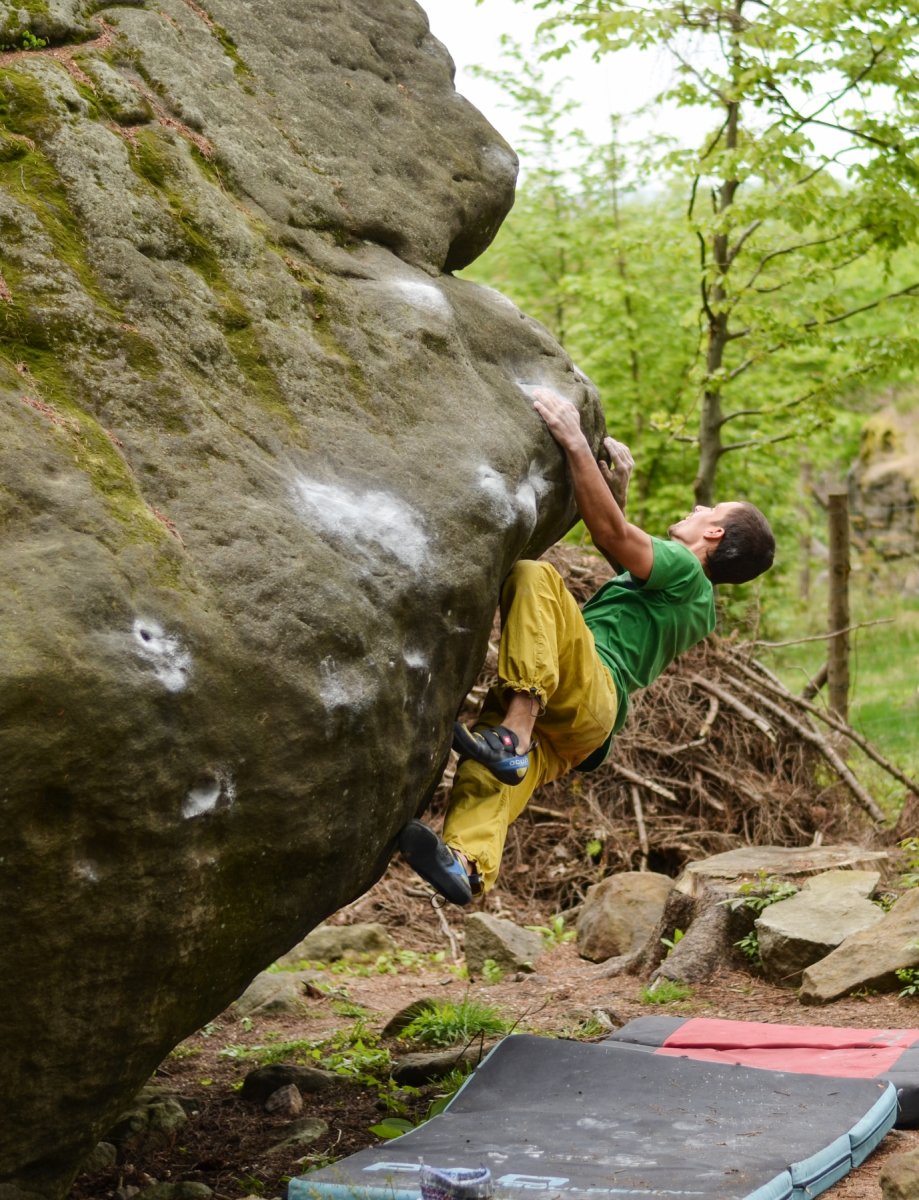 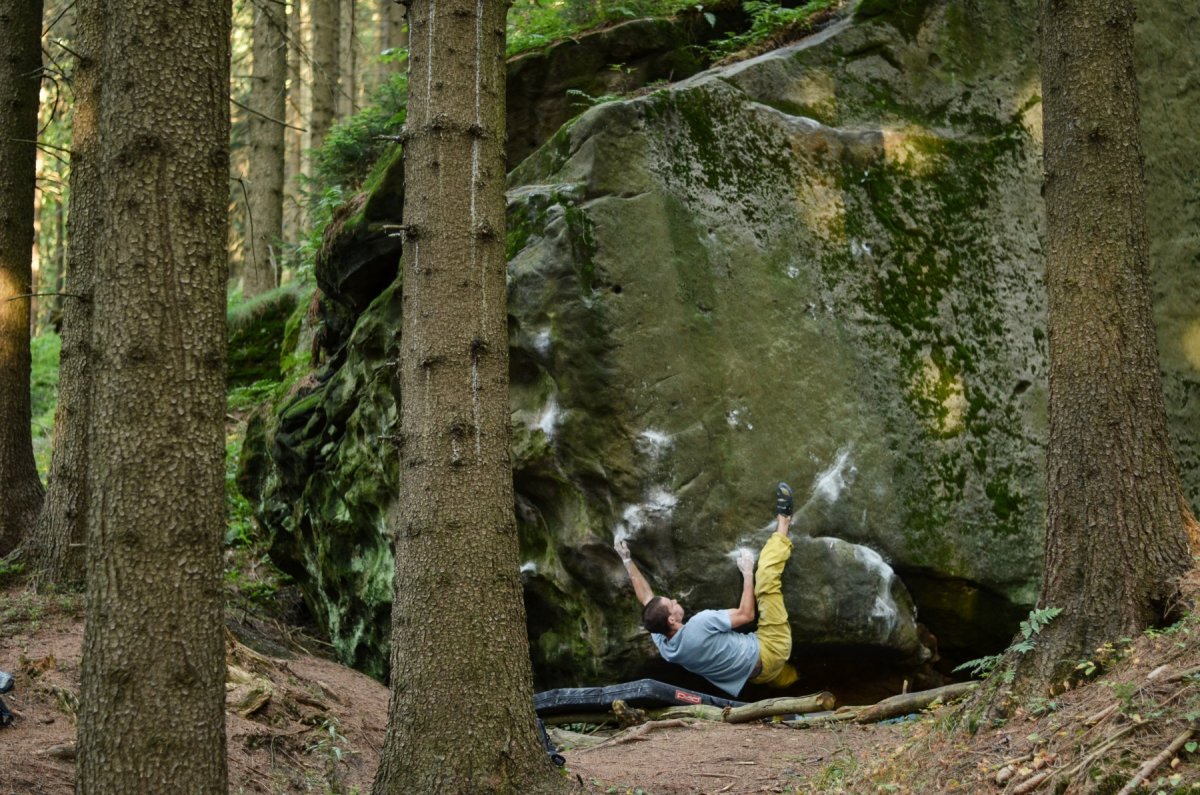 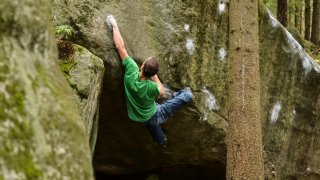 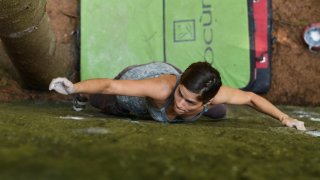 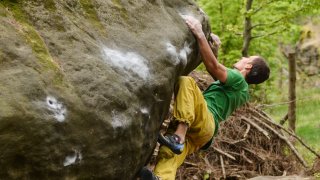 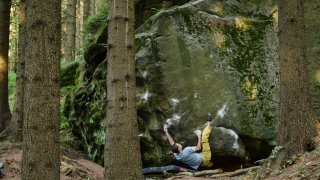